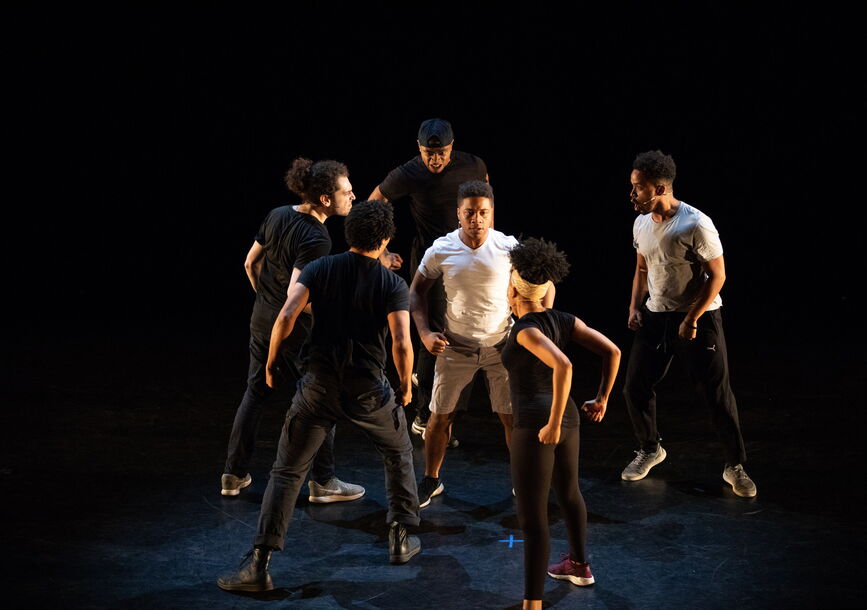 In advance of the streamed version of Try/Step/Trip, on Friday, November 20, writer and composer Dahlak Brathwaite and director Roberta Uno join choreographers Toran X. Moore and Freddy Ramsey Jr. alongside artist/organizer Dr. Shamell Bell for a discursive conversation about art and activism as a vital component of the work. Inspired by Brathwaite’s own history, Try/Step/Trip layers characters, poetic verse, and dialogue over the content of songs to create a theatrical piece that blurs the lines between hip-hop and dramatic performance. The group will discuss their work in light of the events of 2020 and the Black Lives Matter Movement.

The next night, on Saturday, November 21, excerpts from both Try/Step/Trip and Brathwaite’s solo performance, Spiritrials, presented at REDCAT in 2017, will be screened. An artistic conversation with Brathwaite, Uno, Moore, and REDCAT’s Deputy Executive Director & Curator Edgar Miramontes will follow, discussing the process, approach, aesthetics and collaboration necessary to develop a devise ensemble work (Try/Step/Trip) from a solo work (Spiritrials).

Dahlak Brathwaite is a multi-faceted hip-hop artist that maximizes his abilities as musician, actor, poet, and educator within the transformational space of the theatre. Since launching onto the national spoken word scene by appearing on the last two seasons of HBO’s Russell Simmons’ presents Def Poetry Jam, Dahlak has showcased his seamless blend of hip-hop, theatre, and spoken word at over 200 universities throughout the United States and Europe. Dahlak has worked closely with Broadway veteran and Rockefeller fellow, Marc Bamuthi Joseph. Dahlak has written and performed in several of Joseph’s critically acclaimed plays, including Word Becomes Flesh – presented at The Public Theater and The Lincoln Center. From 2007 to 2012, Dahlak has released five musical projects, which includes the album Spiritrials that served as a soundtrack to his solo play. In 2014, Dahlak was selected as a musician for a U.S. State Department International Exchange Fellowship called 1Beat.  Recently, Dahlak was nominated for the 2019 United States Artists Fellowship. Currently, Dahlak is collaborating with director Roberta Uno at CalArts Center for New Performance in order to adapt Spiritrials into an ensemble musical. Dahlak earned his B.A. degree from the University of California, Davis, where he studied English and Dramatic Studies.

“Visionary Instigator” of Street Dance Activism and Global Dance Meditation for Black Liberation, Dr. Shamell Bell is a mother, community organizer, dancer/choreographer, and documentary filmmaker. Bell received her PhD in Culture and Performance at UCLA’s World Arts and Cultures/Dance department. She received her M.A. in Ethnic Studies from UC San Diego and B.A. with Honors in American Studies and Ethnicity specializing in African American Studies at the University of Southern California. Dr. Bell is currently a Lecturer of Somatic Practices and Global Performance at Harvard University and Lecturer of African and African American Studies at Dartmouth College. Her work on what she calls, “street dance activism” situates street dance as grassroots political action from her perspectives as a scholar, dancer, and choreographer. Shamell’s research examines street dance movements in South Central Los Angeles through an autoethnographic and performance studies lens. Her street dance experience includes featured roles in music videos, award shows, and tours. An original member of the #blacklivesmatter movement, beginning as a core organizer with Justice 4 Trayvon Martin Los Angeles (J4TMLA)/Black Lives Matter Los Angeles to what she now describes as an Arts & Culture liaison between several social justice organizations. She also consults for social justice impact in the tv, film, theater and music industry.

Roberta Uno is a theater director and dramaturg. She was the founder Artistic Director (1979-2002) of the New WORLD Theater in Amherst, MA, dedicated to the works of people of color. Over four decades, she feels blessed to have worked with a span of legendary artists and new voices. As a director, she collaborated with James Baldwin (Blues for Mr. Charlie), Alice Childress (Gullah!), and Pearl Primus (Shango de Ima and Lion and the Jewel); and she has worked with theater emerging from Hip Hop and Spoken Word aesthetics by artists such as Marc Bamuthi Joseph, Sekou Sundiata, Universes, and others. Her directing credits include Arranged Marriage by Chitra Divakaruni,the bodies between us by thúy le, I Land by Keo Woolford, Sneaky by William Yellow Robe Jr., Tea by Velina Hasu Houston, Dance and the Railroad by David Henry Hwang, Stop Kiss by Diana Son, A Dream of Canaries by Diana Saenz, Flyin’ West by Pearl Cleage, WALLS by Jeannie Barroga. She was inducted into the College of American Theater Fellows at the Kennedy Center in 2014 and is the Director of ArtChangeUS at the California Institute of the Arts. Heartfelt thanks to Dahlak, choreographer Toran Moore, Assistant Choreographer, Freddy Ramsey Jr, and the ensemble, especially original cast members Ramsey, Jasmine Gatewood and Max Udell for their artistic gifts and faith along this journey.

Toran Xavier Moore is a multidisciplinary artist from Montgomery, AL. Based in Los Angeles, this southern native operates at the intersection of theater, arts management, and movement. He credits the Eclectic Dance Company of Alabama State University as his professional entry point into dance and choreography. Being trained in Tap, Modern, Hip-hop, Moore mainly explores movement through the more percussive form of step. Through a mix of hip-hop and stepping, Moore honors the histories of Black Greek letter organizations, hip-hop pioneers, and ancestral rituals. His current work can be found as choreographer for Try/Step/Trip, a collaboration Dahlak Brathwaite and Roberta Uno. In addition to his choreographic experience, Toran works as an arts administrator and production manager. He currently holds the position of programs manager at the International Association of Blacks in Dance. As a stage manager, Moore has worked at theatres across the U.S. including the Los Angeles Theatre Center, The Blazer Theatre of Atlanta, the Walt E. Disney Modular Theater, and many others. Moore holds an M.F.A from California Institute of the Arts and B.A. from Alabama State University.

Freddy Ramsey Jr. is an American actor, choreographer, and producer from Baltimore, Maryland. Freddy received his MFA in acting from The California Institute of the Arts and has trained with industry names such as Deborah Aquila, Phaedra Harris, Roger Guenveur Smith, and Marc Cashman.Since finishing with his MFA Freddy has also tapped into the world of producing. He is most known for Associate Producing “South Central Love” (BET) and the Amazon Prime Show “Still Broke”. As a recent MFA grad and former collegiate athlete, Freddy brings his persistence and dedication in practice to the craft of acting. His favorite quote is as follows: “Every person has a purpose and every purpose has a process, the question is: Will you persevere?”

The theatrical performance of Try/Step/Trip was commissioned and produced by CalArts Center for New Performance in partnership with Youth Speaks, Inc., and was made possible with funding by the New England Foundation for the Arts’ National Theater Project, with lead funding from the Andrew W. Mellon Foundation and additional Support from the Doris Duke Charitable Foundation. Try/Step/Trip is a National Performance Network/Visual Artists Network (NPN/VAN) Creation & Development Fund Project co-commissioned by Youth Speaks, Inc. in partnership with The Living Word Project, a fiscally sponsored project of Intersection for the Arts, CalArts Center for New Performance, Museum of Contemporary Art Chicago, Miami Light Project and NPN/VAN. For more information: npnweb.org.