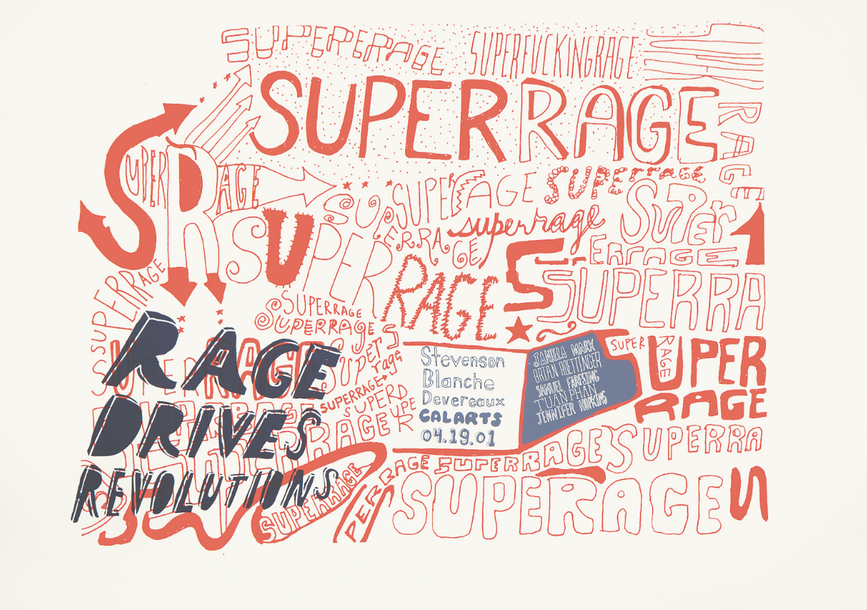 Moderated by Tasheka Arceneaux-Sutton, this salon will discuss the various ways panelists artist Sarah Faith Gottesdiener, professor Daniela Marx, and designer Mindy Seu each use graphic design — uniquely and sometimes in an unorthodox manner — as a tool to address and challenge the status quo in regards to the archive, design education, and protest.

This is the second of a series of conversations that critically address the exhibition Inside Out & Upside Down: Posters from CalArts 1970-2019 in relation to issues of inclusion and representation in the field of graphic design and graphic design education. Organized by Arceneaux-Sutton and Silas Munro, these salons host CalArts alumni, guest designers, artists, and educators in a lively set of virtual conversations.

Sarah Faith Gottesdiener is an artist living in Los Angeles. She has run the project/business/publishers Modern Women Projects for the past 8 years. She has designed for Nike, Sephora, non-profits, artists and more, and her work has been seen on moodboards, in movies, and other media. She has taught at Otis, Scripps, FIDM, and to thousands through her own school. Her 9th book, her first with a major publishing house, The Moon Book, comes out November 24th.

Daniela Marx is a Full Professor of Graphic Design at Loyola University New Orleans.  In the past, she worked at Fabrica, an international research center for design located in Treviso, Italy. Fabrica invites creative talents under 25 from all over the world to experiment with contemporary communication through constant collaboration between different disciplines and the world community.  Daniela has also worked as a designer for George Magazine in New York City. George centered on the theme of politics-as-lifestyle co-founded by John F. Kennedy, Jr. After working in NYC she received her MFA at California Institute of the Arts, where she focused on social-political issues while honing her skills in motion graphics and screen printing. Aside from teaching, she does freelance graphic design focusing on print work, branding, illustration, and book design. She particularly likes to work on projects that can benefit the New Orleans community.

Mindy Seu is a designer and researcher. She holds an M.Des from Harvard’s Graduate School of Design and a B.A. in Design Media Arts from University of California, Los Angeles. As a fellow at the Harvard Law School’s Berkman Klein Center for the Internet & Society, she began an archive of global cyberfeminism spanning three decades. She has also been a fellow at the Internet Archive, co-organizing the Arts Track of the inaugural Decentralized Web Summit. Formerly she was a designer on 2×4’s Interactive Media team and the Museum of Modern Art’s in-house design studio. She has given lectures and workshops at Barbican Center, CalArts, Parsons, Pratt, RISD, Berkeley Art Museum, and A-B-Z-TXT, among others. Seu joined the faculty of California College of the Arts in 2016, and Rutger’s Mason Gross School of the Arts and Yale’s School of Art in 2019.

Tasheka Arceneaux-Sutton is an Associate Professor of Graphic Design at Southeastern Louisiana University and faculty in the MFA Program in Graphic Design at Vermont College of Fine Art. Tasheka is the principal of Blacvoice Graphic Design Studio that does work for small businesses, educational institutions, and nonprofit organizations. Tasheka’s research focuses on the discovery of Black people who have been omitted from the graphic design history canon. She’s also interested in the visual representation of black people in the media and popular culture, especially through the lens of stereotypes. Tasheka holds an MFA from CalArts, where she also worked as a graphic designer in the office of Public Affairs and a BA from Loyola University New Orleans.